If you prefer to go directly to the software without reading click here Topaz Denoise AI.  Use COUPON CODE coolwildlife15 to receive an automatic 15% discount.

I’ve had a few of you asking me about what tools I use in my editing workflow, especially as it relates to denoise and sharpening images.  Today’s review of Topaz Denoise AI will kick off part one of a three part review including Topaz Denoise AI, Topaz Sharpen AI and Topaz Gigapixel AI.

There are two basic tips I’d like to offer before I dive in to the Topaz Denoise review.

TIP #1 AVOID NOISE:  As a best practice always shoot at the lowest possible ISO you can for any given scene and that usually translates to trying to maintain a certain shutter speed.  Just know that the higher you push your ISO the more noise you will introduce in to your images.

TIP #2: KNOW YOUR CAMERA: Every camera’s ability to handle noise varies greatly so I strongly suggest that you experiment with your camera.  Take the same low light image at all ISO’s and review them at 100% in post.  This will allow you to decide where you feel the maximum limit is for your camera and it is based on your tolerance for noise and how you plan to use your images.  If it is a web post at 72 DPI I’d push a lot higher than if it is going to print.

So you’re just back from you’re morning shoot and you’ve captured an image you like but it looks grainy, now what.  I’ve used the noise reduction controls built into Photoshop, Lightroom, ON1 Raw, DXO and Topaz Denoise over the years and they’ve all gotten better over time with this latest AI version of Topaz Denoise being the best yet in my opinion.  Most denoise software does a great job removing noise, but the best of the best do it without trading off image detail and that is what Topaz Denoise AI does better than the rest.

This latest version inspected thousands of noisy images and added Artificial Intelligence (AI) to help the software know the difference between image noise and image data. Below is a sample image from a Nikon Z7 shot at ISO 4000.  The first image is the before image and the second the after image.

You can click on each image if you wish to enlarge it. 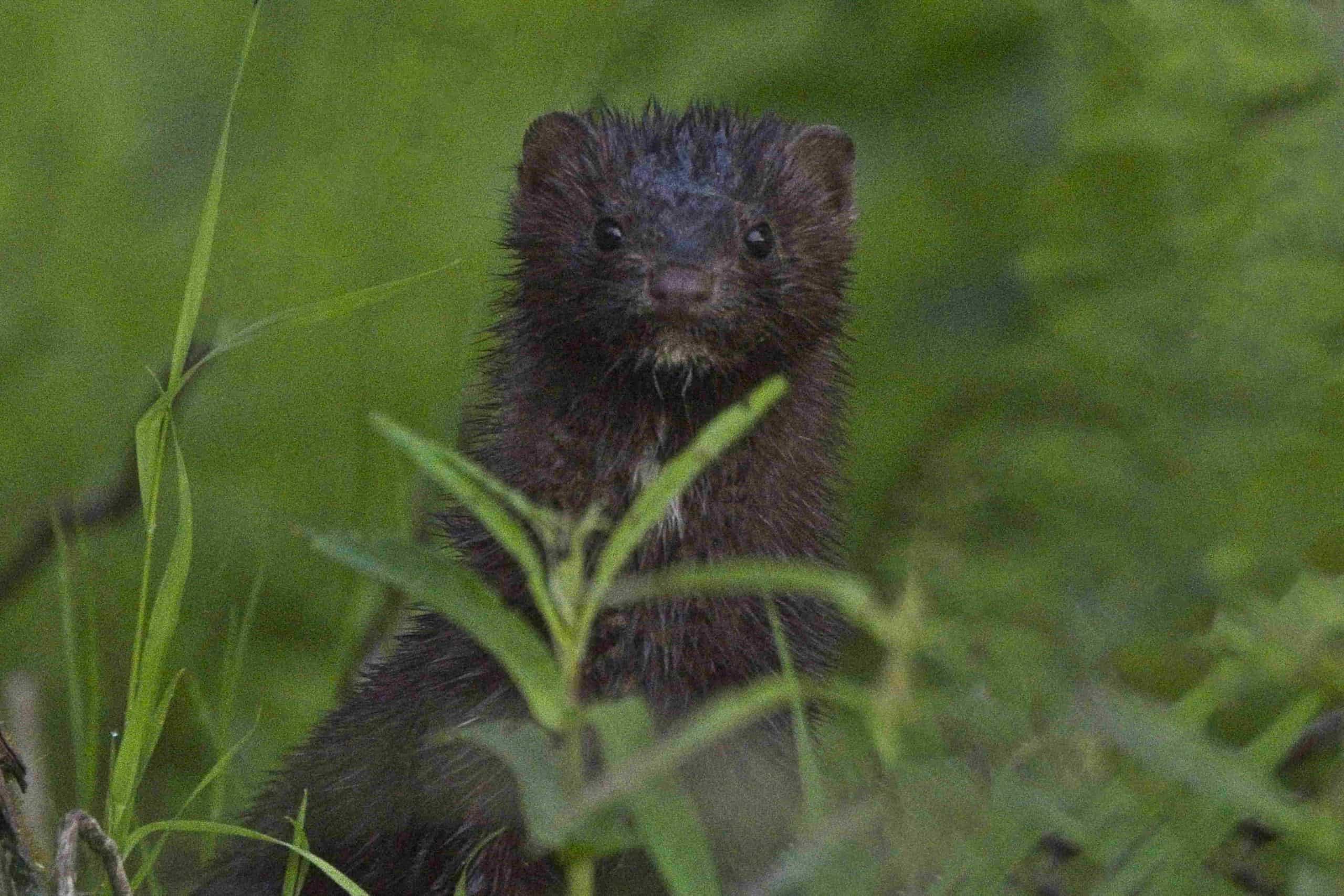 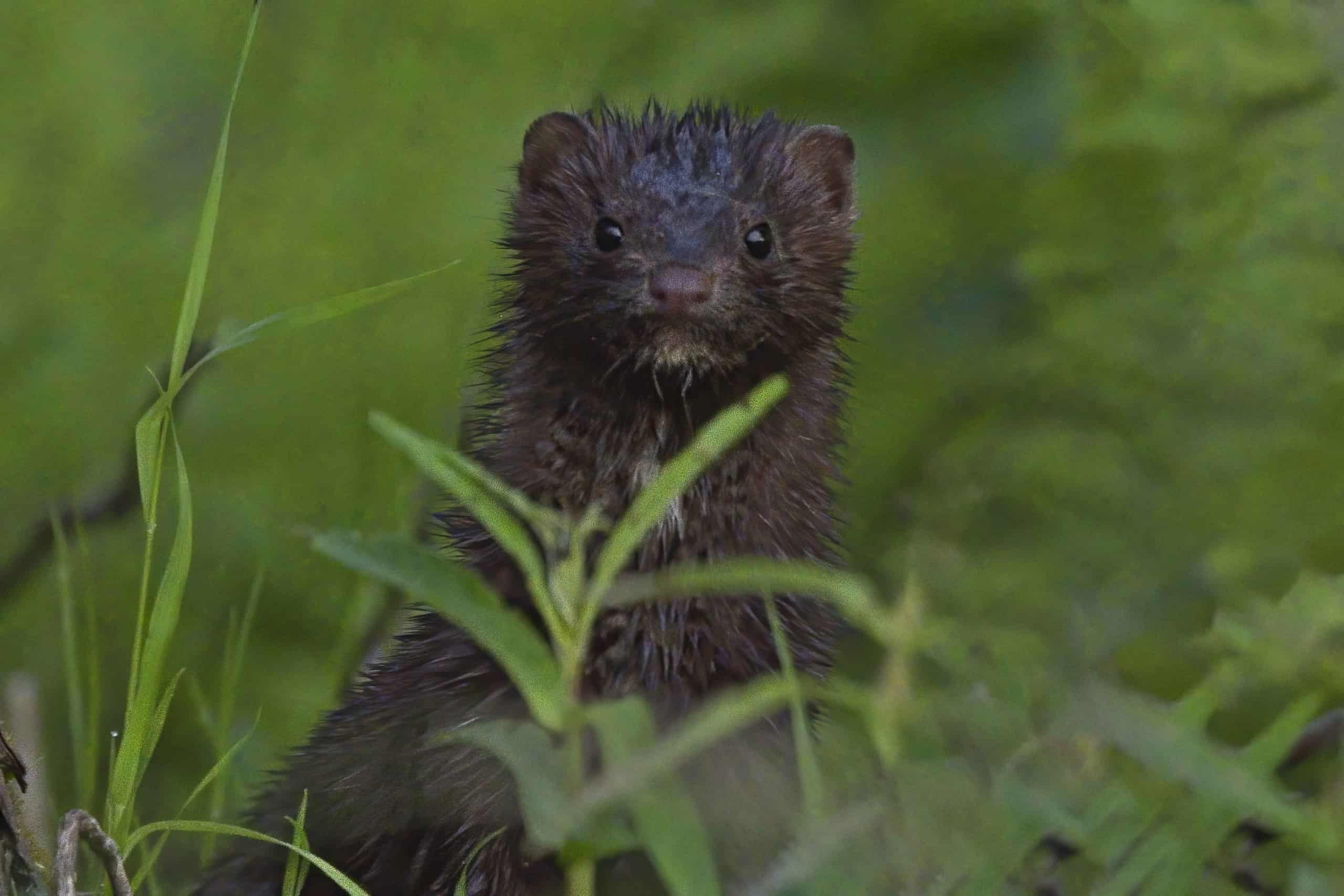 I did not spend a lot of time on this image as it is not one I would ever post to my website but you can see the before and after noise reduction and the preservation of details between the two images and it is drastic.  In the enlarged after image you’ll see where it do not as great a job with the blades of grass in front of the mink, but if this were an image I was printing that could be easily cleaned up.

The denoising process is not automatic, every photo is different and your adjustments within each of three sliders will vary from image to image. You can remove noise, enhance sharpness and recover details. The process is quick and easy to make changes and you can set the software to automatically update the preview as you make changes so you can see the impact your changes are having on noise and detail on the fly.  The speed of rendering will be dependent on the performance of your computer, especially your graphics card.  You can set GPU speed preferences within the software to step things up.   If you get too aggressive with the noise slider you will lose detail so keep an eye on the preview at 200 and 400% and you’ll be able to find a balance where the noise is removed and the detail preserved without halos and artifacts being present. 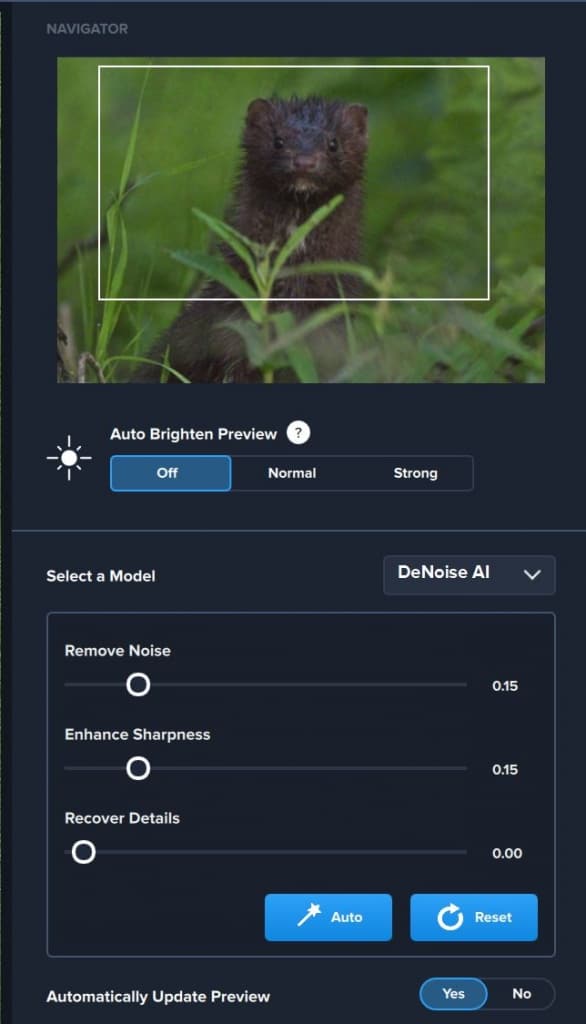 DeNoise AI can be used as a standalone program and inside Photoshop as a plugin and sells for $79.99 at time of writing.  They do offer a bundle price so if you think you might want Topaz Denoise AI, Sharpen AI, Gigapixel AI and JPEG to RAW AI it is cheaper to purchase as a bundle then as individual products.

Topaz offers a 30-day free trial of the software, so you can take any of these products for a test drive and judge for yourself.  You’ll find the software here Topaz Denoise AI.