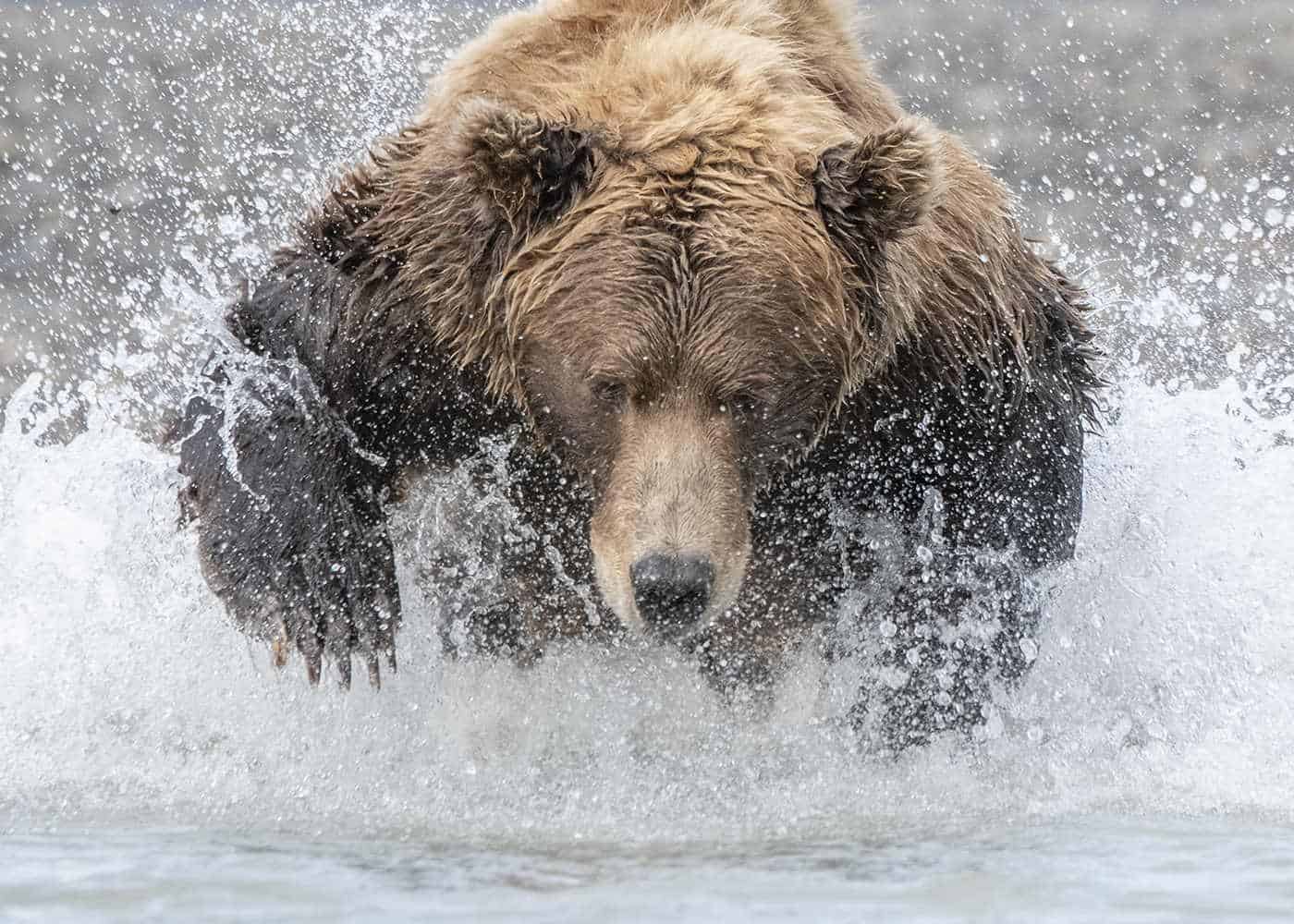 In September of 2018 I had the pleasure of camping with Kent Fredrikssen in Hallo Bay for ten days.  Our camp was set with a view of a massive glacier which the sun set behind every evening, the landscape was truly breath taking however not to be taken lightly. One thing you need to be very aware of in Hallo Bay are the tides, with fluctuations of 18 feet or more this means you can easily get cut off from your camp if you are not paying close attention.  It also means you can’t always shoot when you want to so you need to plan your opportunities to shoot based on the tidal movements.

On day two of my trip it became apparent that once the tide receded the light was going to be fantastic.  With the tides still fairly high, my shooting partner and I slapped on our waders and began our hike.  It was tough slugging but after a kilometer or so we came upon a tributary that fed in to the tidal flats.  There we found a mother Coastal Brown Bear (aka Grizzly Bear) who had two very hungry, yet playful cubs waiting on shore for a meal.  Some years her job is easier than others and as it turned out this was one of those challenging years as the salmon run in Hallo Bay was not as plentiful as in other years.

Many of the younger bears we observed ran after anything that moved and 9/10 times came up empty.  Experienced bears like this mother, patiently watch the stream for any sign of a salmon and seemingly only act when the odds of a successful catch are highest.  With very few fish it was clear that this salmon run had turned in to marathon fishing adventure that was going to require all of her skills.   She took chase only a few times, but when she burst in to action the result usually ended with happy cubs gorging on salmon and two photographers with smiles on their faces a mile wide.

To increase our chances for capturing a winning image, we chose to setup downstream, which meant the majority of the time she would be running parallel or towards us with the sun at our backs which provided nice light on the bear.  I extended the legs of my tripod as flat as possible and lay in the mud so that I was as close to eye level as I could be to the bears approach.  I did pump up the ISO to keep the shutter speed at 1/1250 to freeze the action.

I went on this trip with a vision of capturing an image of a grizzly bear charging straight at me while chasing down a salmon, with the salmon or at least the dorsal fin of the salmon clearly visible in the image.  I was thrilled with the pursuit image I captured that evening however the image I had hoped to capture was still missing that key element which I never did capture the remainder of the trip.  That’s the thing about wildlife photography, the challenge is held within its unpredictability, so patience only gets you so far, than it’s left to mother nature and chance.  The only thing you can do is return to the scene, keep shooting and hope for the best.

If you’re a wildlife photographer this is a bucket list trip that I highly recommend.  Being this close to these magnificent bears is an experience of a lifetime.  Be prepared to get down and dirty when you shoot, being eye level with your subjects is a key ingredient to capturing great images.  Don’t forget to look up from your view finder once in a while and take it all in, the scenery in Alaska is heavenly.